Why Can’t We Be Friends? 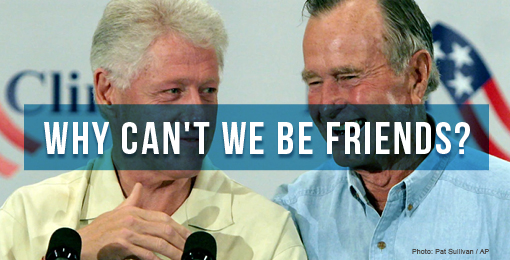 Sometimes it is difficult to get positive media attention on your own, but there is something very interesting about two unlikely partners who agree on an issue.

When crafting a communications strategy, a key consideration should be how your competitors are communicating their value proposition to the market and how you can be different to stand out. This is standard practice to any seasoned PR and marketing executive. This competitive analysis, however, can be turned on its head. And in many cases, advantages can be found through identifying peers who are aligned with your own beliefs and reinforcing these values as part of your communications strategy.

Sometimes it is difficult to get positive media attention on your own, but there is something very interesting about two unlikely partners who agree on an issue. Think George H. W. Bush and Bill Clinton. Their unlikely friendship seemed odd after the two presidents ran against each other in the 1992 campaign. Bush famously called Clinton “bozo” during that campaign. Clinton repeatedly pointed out Bush’s age to paint him as an old, out-of-touch geezer.

When a tsunami in 2004 walloped the beaches and coastal cities of Indonesia, Thailand and Sri Lanka, then-president George W. Bush brought the two men together. Although they were polar opposites politically, they both were prodigious fundraisers and had robust address lists of global leaders. Those two skills could catalyze the worldwide effort to help the people who lost everything.

The media picked up on this unlikely pair – some media outlets even called them the “Oscar and Felix of American politics,” a reference to the 1970s sitcom, The Odd Couple. That interest helped generate media coverage and raise awareness of the need for more donations and additional assistance. Subsequently Bush and Clinton headlined events and made television commercials. This unlikely pair was able to leverage the curiosity factor to maximize attention and fundraising dollars.

To be sure, there is no shortage of unlikely pairings in the business realm that speak to the power of collaboration (Apple and Microsoft, Coke and Pepsi, even GM and Ford). While competition will continue to fuel the market and drive innovation, sometimes collaboration can have the same effect in communications. For this reason, as part of any competitive analysis, it can be worthwhile to look at your company’s ecosystem to see if there is an unlikely pair that agrees with you on a key issue. They can help ignite interest in a subject you could not get attention for on your own.