Every day brings a new development in the ongoing disruption of the financial services industry. To help make sense of the recent activity, we’ve highlighted six of the top fintech stories from the first half that signal where the industry is going. 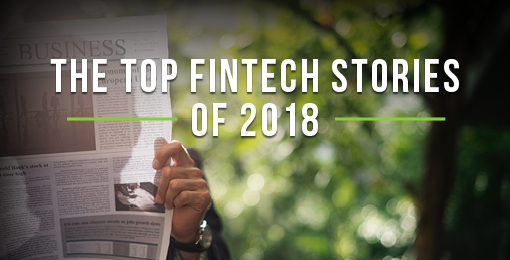 In case there were any lingering doubts about disruption in financial services, the first six months of the year have seen several considerable developments that speak to both the momentum in fintech as well as the legitimatization and embrace of new technologies that have already altered the larger investment ecosystem.

The fintech universe, itself, continues to expand and now encompasses categories ranging from insurtech and payments to regtech and roboadvisors. CB Insights, in its most recent report, documented that VC-backed fintech companies collectively raised a record $5.4 billion across more than 320 deals in Q1 – a sign that both investors and entrepreneurs recognize additional white space worthy of pursuit. Meanwhile, tech giants such as Amazon and Alibaba continue to make inroads in financial services, further motivating incumbents like Goldman Sachs and JPMorgan to ratchet up their investments in new technologies and capabilities. The former, in May, even launched a cryptocurrency trading desk.

The tectonic shifts occurring across financial services, while posing new risks, has also created considerable opportunities, whether it’s to help legacy asset managers reimagine their back- and middle-office operations, address the growing data risk that comes with digitalization, or simplify investing and wealth management for the masses. Another corollary of this activity is the barrage of news that can make it hard for casual observers to discern which stories matter most and highlight the direction of the industry at large.

We’ve taken the time to reflect on the year so far and have provided our take on some of the most notable news stories that have emerged. What follows is by no means comprehensive, but rather speaks to the key themes that are top of mind for many of our fintech clients.

Amazon checks out checking accounts
As a rule, anything Amazon does commands attention. But the online retail and tech giant created a buzz in the financial services sector when news broke in March that the company was in talks with big banks, including J.P. Morgan Chase & Co. to develop checking accounts. Amazon’s access to millions of loyal customers (particularly younger consumers) and its wealth of data makes it a force to be reckoned with. Initially, many banks felt threatened by its potential entry into the market. The story has changed slightly as it has developed, however, as incumbents are viewing Amazon more as a partner than as a threat. (It’s worth noting that Amazon, JPMorgan and Berkshire Hathaway have also teamed up to create a new venture in healthcare.) Only time will tell if and how the company plans to develop banking products. At the very least, the developing story put banks on notice and served as a call to action for institutions to reevaluate their business strategies moving forward.

Robinhood on the rise
Founded in 2013, Robinhood set out with the goal of letting users trade securities for free. Five years later, it’s clear that their value proposition to democratize stock trading resonated with the public. A recent funding round for the online stock brokerage pushed its valuation to about $6 billion – up from $1.3 billion the previous year. Baiju Bhatt and Vlad Tenev, the two co-founders, have achieved an unprecedented amount of success in a relatively short amount of time, demonstrating fintech’s transformational potential.

The company, which has over 2 million users, continues to attract traders, by extending into new markets, such as cryptocurrency.

Fraudsters won’t quit
Question: What do Sears, Panera Bread, Delta Airlines, Saks Fifth Avenue, Under Armour, and SunTrust each have in common?

Answer: They’ve all experienced a data breach in 2018. In fact, nearly every week sees another big-name company disclose compromised customer data. As Bluefin, one of our fintech clients, will tell you, each of the aforementioned breaches was the result of malware and were completely preventable. Until businesses both big and small learn this lesson, the frequency of data breach announcements will only increase.

Related: GDPR to Shine the Light on Fund Managers’ Data Governance
It’s no secret that financial services companies have a target on their backs as well. What has changed, however, is that the European Union’s General Data Protection Regulation, or GDPR, will force global fund managers to report any and all data breaches or face fines of as much as 4% of global revenues.

To be sure, GDPR is a wide-ranging directive that sets data collection and processing guidelines across all industries. Within financial services, however, the penalties that come with noncompliance have only increased the emphasis on cybersecurity and the urgency with which executives are addressing their shortcomings. In a recent survey of asset management executives polled by BackBay and Osney Media, roughly half indicated that they would increase spending on cyber security in the coming year.

DOL fiduciary rule gets pushed back, only to be struck down
Since its inception, the Department of Labor’s (DOL) Fiduciary Rule has been top of mind for many of our clients in both BackBay’s wealth management and fintech practices. Debate on the potential outcome and impact for wealth managers, should the regulation ever pass, lingered in the news for months. However, in March, the rule was vacated by the 5th Circuit Court of Appeals. The SEC still plans to forge ahead in establishing its own fiduciary rule, so we will stay tuned to see how the regulation will ultimately play out.

Arizona sets the stage for fintech sandboxes
With new fintech players entering the market at a rapid pace, legacy regulators have had trouble keeping up with how to manage the risk in this new space. Fintech sandboxes have been established to allow new fintechs to be utilized on a trial basis with looser regulatory restrictions, while still offering consumer protection.

Sandboxes have been successfully deployed in other countries such as the U.K., but in March, Arizona became the first U.S. state to follow suit. Critics argue that it could allow firms to get away with activities that wouldn’t be in the best interest of the consumer, while proponents claim it will help drive innovation in the financial services industry. There are several potential outcomes, but of particular note, industry participants will be tracking the impact on emerging Distributed Ledger Technology (DLT) since it’s high on the radar of the sandbox’s lead sponsor, Arizona Rep. Jeff Wening.

As the fintech industry evolves there’s sure to be no shortage of major news coming out of the sector, and we look forward to keeping you up-to-date on the latest and biggest news in fintech. Stay tuned for our regular updates!

More information on how BackBay helps fintech companies tell their story can be found here.