A new report from BackBay Communications, exploring the marketing efforts of family offices, highlights that many are just now starting to share their stories with the broader market.

There’s a misconception in investment circles that family offices represent the “new money” within the larger asset management ecosystem. This is somewhat ironic, of course, because many of the largest and most influential family offices pre-date the bulk of the investment universe – not by years or decades, but by generations. 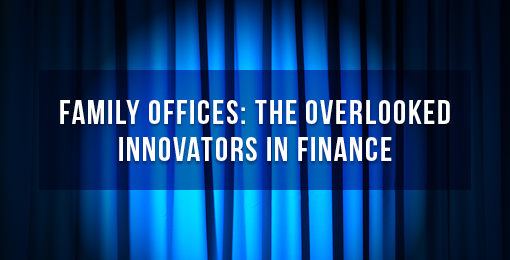 As recently as 15 years ago, some of the most notable names in private equity still didn’t have websites, few if any were producing content regularly, and most thought of PR as a defensive tool to handle crises rather than another lever to improve dealflow, help fundraising, and augment recruitment.

Moreover, this misconception is generally accompanied by the implication that family offices are in some way less sophisticated than professional asset management firms. Anecdotally, when talking to investment professionals about which LPs might have been hardest hit by the COVID-19 disruption, multiple observers have applied a pretty broad brush identifying that it’s mostly “newer investors” in PE “such as the family offices.”

To be sure, given the massive wealth creation over the past decade, the population of ultra-high-net-worth investors has grown considerably. Moreover, in light of the recent migration into illiquid asset categories, such as private equity or venture, it’s also probably true that many newer investors are less diversified and may be concentrated in the harder hit vintages.

That being said, it is still a misconception to imply that family offices are any less sophisticated than more traditional asset managers. If anything, many of the most groundbreaking innovations in finance over the past few years have emerged out of the family office space.

Impact investing, for instance, represents a notable example. Sure, John Wesley preached against the “sin” industries as far back as the 18th century and divestment efforts during the Vietnam War and the apartheid era in South Africa helped to demonstrate the power investors wield as activists. But the idea that investors could earn market rate returns while proactively and intentionally promoting a specific cause hadn’t really been considered until the Rockefeller Foundation, back in 2007, gave impact investing its name. And today, many of the most creative applications of impact strategies are being spearheaded by family offices.

Family offices, over the past few years, have also seen other fund managers mimic their approach. In private equity, in particular, many of the largest managers have rolled out long-dated funds, with fund lives ranging from 15 to 25 years (and in some cases longer). For many family offices that make direct investments in private equity, their perpetual holding periods have historically been a key selling point to business owners, who want the resources of a financial sponsor to help fund growth, but without the uncertainty of a limited fund life.

So why, given this track record, do family offices often face a stigma as somehow being less rigorous or sophisticated? This was a point that Pritzker Private Capital’s Paul Carbone bemoaned last year. Private Equity International, covering the publication’s Operating Partners Forum, quoted Carbone as saying, “Sometimes people think about families as slow and whimsical and that we accept lower returns.”

There may be several variables at play, but one factor that can’t be overlooked is that many family offices have generally eschewed external marketing and communications, leaving the broader market to arrive at their own perceptions in a vacuum. However, this is changing, as many of the most influential names have at least begun to test the waters.

As part of a new report published on June 9th, “Family Offices Tiptoe into the Spotlight,” we found that among the top 20 family offices, many have taken steps to better influence their public-facing narrative. For instance, over half, or 55%, have launched a website, while 70% have hired PR professionals, either through third-party agencies or in-house representatives. Most notably, three quarters now produce content regularly, publishing thought leadership through op-eds, insights pieces on their websites, or producing research-driven white papers.

The report also delves into the drivers behind these new marketing initiatives and offers case studies highlighting how BackBay Communications has worked with family office clients over the years and the positive results achieved.

In many ways, though, this budding appreciation for marketing mirrors the curve experienced in private equity. As recently as 15 years ago, for instance, some of the most notable names in the space still didn’t have websites, few if any were producing content regularly, and most thought of PR as a defensive tool to handle crises rather than another lever to improve dealflow, help fundraising, and augment recruitment.

The payoff for family offices is that there is still a first mover advantage. We explain why in the report. Through sharing their narrative, the broader family office community can also shed its image as any less sophisticated than other constituencies in finance and show the world the creativity and innovation coming out of the family office segment.