BackBay recently attended SuperReturn North America, held for the first time in New York City. The popular event (1300+ registrants, according to conferences organizers) featured lively discussions with general partners, limited partners, placement agents, data providers, consultants and others, in more than 20 panel sessions and keynote interviews, on myriad issues impacting the private markets. The conversations illustrated a highly dynamic and meaningfully evolving sector that while facing some headwinds, including renewed regulatory scrutiny, continues to grow in presence and influence, offering enormous opportunity for all participants in alternative investing. 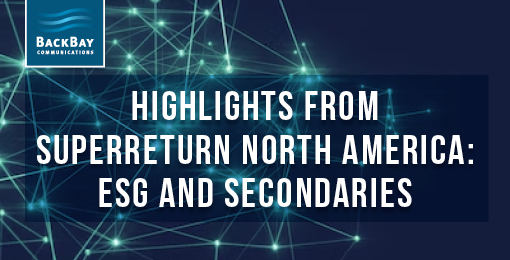 The conversations illustrated a highly dynamic and meaningfully evolving sector that while facing some headwinds, including renewed regulatory scrutiny, continues to grow in presence and influence, offering enormous opportunity for all participants in alternative investing.

Two areas of notable discussion at SuperReturn North America were the increasing interest in, and adoption of, ESG standards, and the growth of the secondaries market. (BackBay is a long-time sponsor and communications partner of SuperReturn’s conferences). Following is an overview of those discussions.

Although vocal pushback against ESG continues in some quarters, particularly in the public markets, the general consensus among speakers at SuperReturn was that adoption of, and adherence to, environmental, social and governance standards in the private markets is “here to stay.” One highly experienced limited partner described ESG as an element of every investment program they’ve encountered, across asset classes and geographies, from European entities to “red state Alaska.”

While acknowledging that some GPs consider adoption of the standards to be “a burden,” and that we can expect various levels of adoption, one fund manager said he views adherence to the principles as “part of a virtuous circle, not a vicious circle,” that positively shapes company culture, improves employee recruitment and retention, drives new business and ultimately fosters growth. A general partner at a fintech-focused VC firm discussed the incorporation of ESG into his firm’s due diligence process and that whether a company has a functioning ESG program is less important than management’s “attitude and posture toward the issue.” He described embracing ESG standards as a “bit like eating your vegetables,” a must-do for optimal performance. While acknowledging the still significant (“a tectonic problem”) need to develop agreed-upon definitions and metrics, he believes adoption of ESG will be “table stakes in three to four years,” fundamentally viewed as accepted and expected “good corporate hygiene.”

Findings from Preqin presented at the conference generally support this overall sentiment, with 65% of investors surveyed saying ESG is “a make or break,” and 40% of fund managers indicating they have a “mature implementation” of ESG, with half of those indicating these efforts are in progress. That said, when it comes to actual adoption, it appears significant work remains.

Preqin runs transparency metrics that measure how well fund managers and LPs are proving their commitment to ESG based on the number of documents the organizations publish on the key performance indicators (KPIs) of ESG. The findings are somewhat stark. The median transparency score for fund managers is just 5%, indicating that only two of 37 KPIs have associated documents, and those tend to address relatively less-substantive KPIs such as adoption of a code of conduct.

Parsing the transparency metrics across private capital fund managers by asset class, Preqin found that private debt is near the top in terms of scoring, second only to infrastructure. The others, in descending order, are real estate, private equity, natural resources and venture capital. Per Preqin, the top five issues (in order of significance) that investors view as most relevant for ESG investing in 2022 are plastic and waste, water management, natural disasters, female inclusion in leadership, and diversity and inclusion in leadership.

The title of one of the conference’s two secondaries panels, “The secondaries market: from panic play to rebalancing tool to booming asset class,” neatly summarizes the evolution, current state, and overall assessment among speakers, of today’s secondaries market.

A panelist from a well-known PE firm, in discussing the market’s paradigm shift, noted that secondaries has fully shed its earlier negative connotation, becoming a “regular part of rebalancing today.” While global transaction volume climbed to $130 billion last year, “we are still just scratching the surface,” according to the speaker, with secondaries accounting for only four percent of capital in the private markets. Other panelists variously described how we are “in the early innings” and that secondaries is “still in its infancy,” a liquidity tool of which many are still learning.

In addition to new entrants (one speaker noted that 50 percent of sellers in the first half of 2022 were new to the market), other features of the growing secondaries market include greater specialization and the expansion of available solutions. Another notable change has been the continued acceleration of deal making, owing in good part to increasingly sophisticated buyers and the widespread availability of data. According to one GP, a decade ago, a secondaries transaction typically required up to a year to complete. By contrast, his firm today can often review a prospective seller’s entire fund portfolio in only one hour and provide a bid that will be within three percent of the firm’s final offer.

While secondaries “has had a great run” in terms of deal making volume, with a notable $53 billion in transactions in the first half of the year, expectations are for activity to “be a bit down” in 2022 overall, due to widespread macroeconomic and geopolitical uncertainty. Looking further ahead, one general partner predicted enormous growth in GP-led deals, with these transactions alone possibly reaching $200 billion in volume over the next five years. He noted such growth would be limited only by structural changes in the markets that would provide additional liquidity options, such as private equity moving into 401k plans or being packaged into mutual funds and similar retail offerings. He sees this as the larger and more consequential trend over the next 10 to 20 years. Another GP was even more bullish, predicting astonishing growth, with annual secondaries transaction volume reaching $250 to $300 billion by 2025 and $1 trillion by 2030. The only impediment to this growth would be insufficient capital coming into the market and not building the required resources to execute on the transactions.