This year, The Association for Corporate Growth’s (ACG) EuroGrowth conference returned to London. The annual international middle-market event saw M&A professionals and business leaders gather at the Hilton Bankside to hear from knowledgeable speakers, speed network and most importantly, source deals – or at least get better at it. 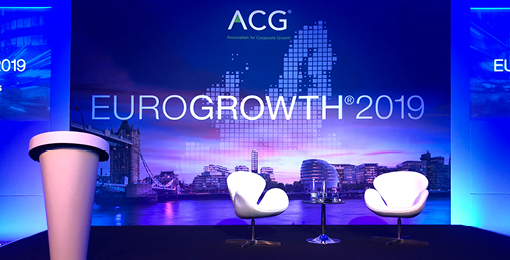 “The good news is that the future has arrived – and it promises recovery."
- Trevor Williams, former Chief Economist at Lloyd's Bank.

Stewart Licudi of William Blair said: “If you don’t leave here with a deal, you’ll at least leave with the knowledge to be more thoughtful and productive in your M&A work.”

So what are the key issues on the minds of M&A professionals?

Trevor Williams, former Chief Economist at Lloyds Bank, opened the day by painting a picture of the goings-on of the global economy. He touched on growing policy uncertainty, trade tensions and weakening growth impulses, but reassured that it’s not all doom and gloom. Global cycles tend to run eight to 10 years so we are due a slowdown, he said.

“The good news is that the future has arrived – and it promises recovery. There are all sorts of technologies that will save us from some of the difficulties we face,” he said.

He highlighted technologies that lower transaction costs, such as soil moisture sensors used in the agriculture industry; printed circuits in manufacturing; blockchain in financial; and smart systems in energy. And the pace of change is accelerating – it’s taking fewer years for new technologies to come to the market and make a meaningful impact.

For those that fear their jobs are at risk of automation, fear not, says Trevor. For every job lost at the hands of automation, there will be plenty more created. Take for example the role of the data scientist that was unheard of a few years ago – and was infamously declared in 2012 by the Harvard Business Review as the “the sexiest job of the 21st century.” The digital world will need workers who can easily adapt and the make the most of new technologies.

In a unique format, Jo Bennett Coles, Managing Director at FGI Finance, quite literally donned her boxing gloves to take on The Riverside Company’s Tommy Seddon to debate whether private debt or private equity would be the more appropriate vehicle in a number of hypothetical investment scenarios.

The cases were well made on both sides and in each of the three scenarios, they managed to divide the room, and – perhaps unsurprisingly – in most instances the pugilists agreed that a blend of equity and capital may be most appropriate. What did come through loud and clear was that there’s no shortage of alternative capital sources available and management teams have got a tough time on their hands figuring out the best option for them. As Tommy highlighted, there is a lot of capital sloshing around with the growing popularity of the asset class coupled with the emergence and development of new strategies, like private debt, in recent years. This is prompting the need for private equity firms to both raise their game and to differentiate from their competitors around, for example, their OpEx expertise or similar. He also noted that we’re likely to see private equity funds become increasingly specialised as the industry continues to mature.

Differentiation in the private equity industry is a subject that’s close to our hearts at BackBay and we have long advocated the benefits of building a differentiated brand. As our 2018 whitepaper on the use of content marketing in the industry revealed, it’s a trend that’s gathering momentum and the fact it came up more than once at EuroGrowth suggests that it’s becoming more and more of a consideration for forward-thinking private equity firms.

Post-acquisition integration: Ripping off the band-aid

In an engaging breakout session, industry experts discussed what it takes to execute a successful post-acquisition integration. Duncan Ramsay, Investment Director at ECI Partners, said the key factors are: a) whether the customer base remains post-acquisition b) cost synergies, and c) new capabilities acquired, such as territories or services. For Joaquim Borras, President of Edad & Vida, it’s a case of ripping off the band-aid – painful but quick – to minimise unrest among employees.

“Integrate as much as possible as soon as possible. Otherwise you risk losing good talent,” Joaquim said.

As for the smooth integration of the management team, it takes time to build a good rapport so the sooner you start investing in the people aspect of the deal, the better. Andy Currie, Managing Partner of Alantra, believes too much money is spent on financial and legal diligence and not enough on people diligence.

Relationships remained in focus for the final session of the day where Cebile Capital’s Sunaina Sinha and HPE Growth Capital’s Harry Dolman delved into the give-and-take relationship between General Partners and Limited Partners. Though LPs are the more passive investors, they are trusting the fund managers with their money and should never feel uninformed, Harry said. Exchanging information builds confidence and helps both sides know where they stand.

“Treat them as trusted business partners and they will do the same. This is a people business,” Harry said.

Both noted that the balance of power has shifted in favour of GPs, who with their record of returns and demand, are now in a position of setting the terms. Meanwhile, LPs are increasingly seeking not only financial, but also social returns on their investments, Sunaina and Harry noted. So naturally, GPs are feeling the pressure to firm up their environmental, social and governance policy, and allocate more to impact investing. Before committing their money, LPs are doing their homework and asking: Is the GP a signatory of the UN-supported Principles for Responsible Investment initiative? How do they measure impact?

Impact is not just a maturation of ESG, rather they are two sides of the same coin. ESG is defensive, whereas Impact is offensive – it goes one step further, Sunaina and Harry agreed.

As LP appetite for co-investment continues to grow, GP/LP relationships are expected to strengthen through the exploration of such opportunities. And when the power pendulum swings back to LPs, that is when we should see impact investing take on a much greater role in private equity and really take off.

These days, it’s difficult to go a day in the financial press without at least a mention of ESG. The topic repeatedly came up in conversation during EuroGrowth 2019, more so than in any other year that we’ve attended the event. This we believe is a testament to how money managers’ implementation of ESG principles – whether proactively or reactively – is set to become the new industry standard.