Despite changes to the PR landscape in recent years, earned media persists as a top goal for many companies. Earned media’s value endures because it remains as one of the only vehicles for disseminating your brand’s value proposition to a particular audience in an indirect, and non-promotional way. Whether it’s to reinforce your company’s position in the market, supplement sales initiatives, or support recruitment and retention initiatives, earned media has retained its position as a top tactic that drives business for our clients. 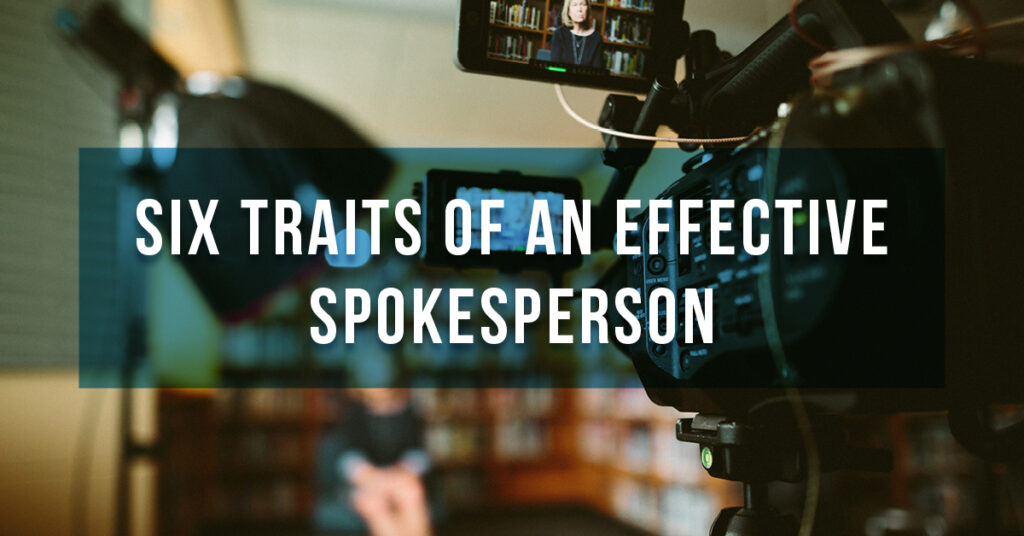 Some spokespeople take naturally to the role, but that may not be the case for everyone. But fear not − a good spokesperson can be developed through effective media training.

But there’s a lot that goes on behind the scenes that helps pave the way for generating consistent earned media for our clients – and most of the time, it starts with the spokesperson you’re putting in front of reporters. Sure, you can draft a stellar press release to make a piece of corporate news come to life, or come up with an insightful trend pitch offering a unique point of view, but ultimately it’s on the spokesperson who, in their conversations with reporters, bring those key messages to bear in a way that will generate the most positive coverage for your firm as possible.

In our experience at BackBay working with and training spokespeople, we’ve found that the most successful ones have a number of common traits that define successful media engagements. We’ve boiled them down into the six most important ones (in our view). Here’s what they are:

1. An understanding of the media landscape

Journalism is a constantly evolving field. It’s no secret that many publications and websites have been forced to trim down their staff roster as they work to generate new revenues through subscription and advertising-based models. In the U.S., newsroom employment dropped 25% between 2008 and 2018. As a result, many journalists have had to move to other industries as employment opportunities in their own are increasingly scarce. Journalists are now outnumbered by PR professionals more than six to one, which means they are stretched thin and are expected to cover more beats with less time and resources to do so. All the while, they are receiving more pitches from PR professionals than ever. In working to educate our clients about the media landscape, the best spokespeople understand this and take it to heart.

2. A willingness to put the work in

It’s easy to get over-zealous with goals of being on the cover of The New York Times or being interviewed on Bloomberg TV, but it’s important to build a foundation first. If your company doesn’t have much recognition in the media, be open to laying the groundwork in the key trade publications. These publications can offer a more targeted audience which can often mean that the journalists who work there can be more technical in their writing. The larger, tier 1 publications often attract a more general business audience, so the writing will often reflect that, touching upon larger trends as a whole. The best spokespeople, while confident in the subject matter they’re talking about, also come with a sense of humility and acknowledge that it takes time to build media relationships.

3. A quote-worthy point of view

We’ve found success in achieving earned coverage for our clients through “newsjacking” pitches. When a big story breaks and journalists are scrambling to put together stories and quickly get commentary, it’s a great time to have insights to offer. Many companies are weary of offering fresh commentary, often because it needs to run through the internal command chain for approval. But in general, we’ve found that the best spokespeople are able to thread this needle of providing on the ground insight while maintaining an appropriate level of discretion. Often, journalists are just looking to make sense of what the news means for the larger industry landscape.

4. Buys into the benefits of media relations

In that same vein, when news hits, the most available and responsive organizations are often afforded the most media opportunities. Timing is everything in these scenarios. A responsive spokesperson will make the time for an interview opportunity. If they can’t but are still eager to participate, we’ve had success helping them put together a few written sentences offering their perspective, that reporters can use. A good spokesperson understands the value in media relations is responsive when presented opportunities.

5. Ability to explain what their company/product does in plain terms

Journalists are always looking to dig through the fluff to get to the facts. An effective spokesperson can clearly and concisely express what their product does and how it works. Alternatively, they can share a takeaway they’ve noticed from clients, why it represents a larger trend, and how their company is helping. A good spokesperson isn’t overtly sales-oriented but is able to verbalize market effects in a comprehensible way.

Determining talking points in advance and perusing a journalist’s recent coverage is a great way to prepare for an interview, but good spokespeople don’t let their messaging get in the way of making a connection. At the end of the day, spokespeople who go into an interview treating it like a genuine conversation have the most success. It’s called media relations for a reason. It’s an opportunity to build a relationship and learn from each other’s perspective. Good spokespeople can relax and remain conversational, while being able to pivot if needed to avoid commentary on a client and also providing concrete examples or stories to back up their points.

The importance of media training

Some spokespeople take naturally to the role, but that may not be the case for everyone. But fear not − a good spokesperson can be developed through effective media training.

At BackBay, our process begins with a media training course and can include mock interviews, a key message review prior to the interview, and a debrief following the interview. This multi-step approach can help to strengthen a spokesperson’s confidence and preparedness. This, in turn, can help them succeed when media opportunities arise, increasing the chances of earned coverage.

If increasing earned media is a part of your firm’s broader PR and marketing strategy, having a good partner to help you lay the foundation can be invaluable. Whether it’s developing a subject matter expert from the ground up, or coaching an established thought leader, the right counsel and guidance can help lay the foundation for your spokespeople to have consistent, successful media engagements that produce quality earned media coverage for your firm.